The Extinction Rebellion is right! The Intergovernmental Panel on Climate Change (IPCC) 1.5°C report is right! Human civilization will be unalterably diminished or even wiped out by climate change, not this year, but if current practice continues, during this century. What is to be done?

The solution is blindingly obvious and known to all: stop using fossil fuels. Other steps may help, like constraining biological methane emissions or moving towards permaculture (agriculture that embeds carbon in the soil) or removing CO2 from the air, but those steps are add-ons. They will only help if we stop extracting and burning fossil fuels, and the IPCC's best estimate is that we must do that, globally, by 2045 to 2055 if we are to have a reasonable chance of holding the increase in global temperature to 1.5°C. (We used to talk about 2°C, but it has become clear that the near-term impact on low-lying real estate, like in Bangladesh, Brooklyn, and Mar-a-Lago, will be too much too soon in this more relaxed 2°C case.) I'll stop now, but you can look all this up on the IPCC's web site.

In case you didn't notice, I just told you that an 80% cut in fossil fuel emissions by the year 2050 is an inadequate target. The IPCC 1.5°C scenario doesn't depend on "only" emitting 20% of 2005-level greenhouse gas (GHG) emissions in 2050, it depends on zero. (This isn't me talking, it's the world's climate scientists, chanting almost in unison.) However, 80 by 50 is a widely adopted, politically accepted target and if we actually set our sights on it for now, we will be doing much less harm than with lesser goals. The New York City Council, with strong support from many sectors among its constituents, adopted targets of 40% reductions by 2030 and 80% by 2050. The following chart shows the corresponding annual reductions 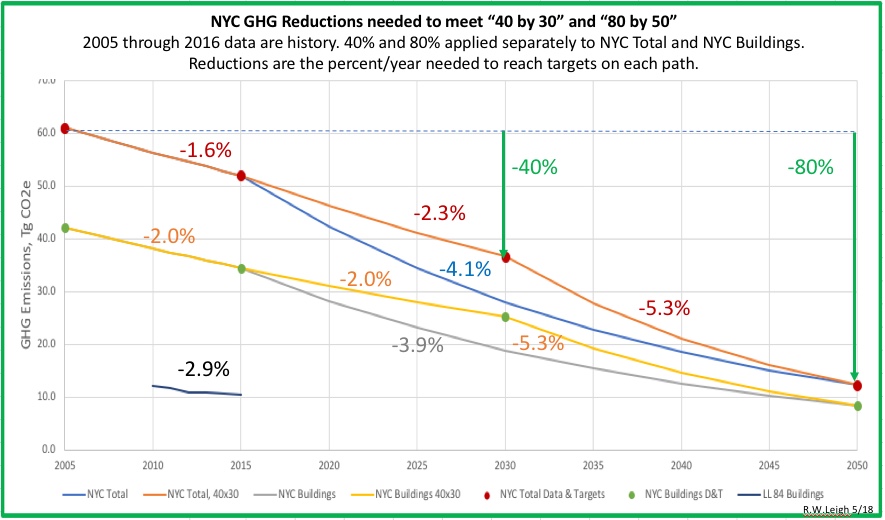 Feeling good about the actual reductions from 2005 to 2016? Don't. The reductions are largely due to moving the power sources on the electric grid from coal and oil to gas, and we can't do that again. I'll get back to the grid a little later. For now, the chart makes the scale of the challenge clear.

Realizing that good intentions don't always get you to your destination, the City Council passed several other laws to help make 40 by 30 and 80 by 50 happen. The most recent is Intro 1253-C of 2018, which was signed into law by the Mayor on Earth Day 2019. This law will place explicit limits on the quantity of greenhouse gases large (over 25,000 sf) buildings can emit, in pounds of CO2 per square foot. The limits were calculated to achieve 40 by 30. The legislation empowers City government to prepare new limits during the 2020s that will achieve 80 by 50. Analyses by Urban Green Council1 and others have maintained that perhaps one quarter of large buildings will have to take some measures to meet the 2024 limits, but that about 75% will have to take measures, some quite strenuous, to meet the 2030 limits. A glance at the chart above will convince you that almost all buildings will have to make further, major improvements to reach 80 by 50.

How can we possibly do this? Simple. Stop burning fossil fuels.

The catch: We burn fuels, mostly gas, for over 80% of our hot water and heat, as well as to generate electricity. How can we stop?

It would seem reasonable to switch our heat and hot water fuels to GHG-free electricity, but there are issues:

So, New York City has an electric system that is currently about 35% GHG emission free, which will suffer a near-term increase in GHGs when Indian Point goes off-line, but which will increasingly find its power supplied by fossil-fuel-free sources. New York State has asserted that it will be 100% free of fossil fuels by 20408, and that includes New York City. (Apply your search engine to "Norman Mailer-Jimmy Breslin.") If you're still with me here, the picture for developing a GHG-free electric grid looks pretty good.

Cost will be a problem. All the evidence is that wind power will get less expensive, so the issue will not be supply. The high price of electricity in New York City is due to the underground distribution system, which is far harder to maintain than are overhead wires. However, we have little choice in that matter. And as electrification increases, we will have to add to or rebuild large pieces of that system. Who will pay? This problem is not unique to New York or to electrification or even to climate change, so rather than open a whole new discussion, I'll offer one reference for future discussions.9

Since we have no choice with respect to fossil fuels, the electrification of New York City must continue. This will raise some interesting issues.

This technology heats the vast majority of New York City buildings, and also provides hot water in most cases. Boilers get old and, eventually, die and must be replaced. This can be staved off by good maintenance and heroic repairs. (Re-tubing, anyone?) For the 50,000 buildings covered by Intro 1253-C, we can expect over 1000 boilers a year needing to be replaced. What to do?

Co-generation, or "combined heat and power" (CHP) is an idea whose time came years ago, but never quite achieved the popularity it deserves. Using fossil fuels to generate electricity, whether in a turbine or a steam plant or a piston engine, thermodynamics limits the efficiency with which the energy of the fuels can be realized as electricity to 30 to 50%. The rest of the fuel's energy must be discarded as heat. This means paying for energy in the fuel that is now being thrown away, as well as paying for the radiator or cooling tower that does this job.

CHP overcomes this problem by capturing the reject heat and using it to make domestic hot water in a residence or for other uses in a commercial building, thereby lowering the amount of fuel gas that must be purchased, the associated emissions, and the associated cost. CHP is a win-win, a sure-fire way to lower a building's emissions (pun intended), useful in any multifamily building with over about 100 apartments, and will be very popular as the impact of Intro 1253 for 2030 becomes more clear and building owners search for straightforward, cost-effective ways to lower emissions.

Why is it awful? Because the useful life of CHP systems (properly maintained and operated) is at least twenty and up to forty years. Install one of these babies in 2025 to help get ready for 2030 and the building will still be burning gas in 2050. If there is any gas available. If not, it's the stranded asset problem.

When does the CHP system become a net source of emissions, rather than a net reduction? That depends on how many hours per year gas is still being burned by Con Edison's suppliers to keep the lights on. As a ballpark estimate, when New York City has fully GHG-free electricity half the year, the CHP system will be polluting more than it is saving — it will be a net polluter. If we are to be 100% GHG-free in 2040, that has to happen by the mid 2030s. My conclusion: if you really want to put in CHP, go ahead, but only after you have made sure that it will have paid for itself by 2035. That way, you can turn it off without feeling ripped off as gas becomes increasingly hard to come by. And your stranded asset won't be that stranded, since it did its job for fifteen years.

The issue is how to increase efficiency and lower emissions in a world where the electric grid is getting cleaner every day, and it turns out it's not as simple as we might have thought. This doesn't mean we can't do it, it just means it's a little complicated. We have to keep thinking on our feet as we forge ahead.

Richard Leigh is a Visiting Professor at Pratt Institute, primarily teaching building science. Formerly, he was Director of Research at Urban Green Council, working on low carbon futures and strategies to attain them. He holds a PhD in Physics, a PE, and is a LEED AP.

Building Operator Training In The Time Of Climate Change