From Evolution to Revolution: Enabling Clean Energy at the Edge of the Electric Grid

On October 29th, 2012, Superstorm Sandy slammed into New York City's shoreline. In the days and weeks that followed, the New York City Subway system and all but one of the road tunnels entering Manhattan experienced debilitating flooding, entire neighborhoods like Breezy Point, Queens were virtually eviscerated and several major hospitals, including Bellevue Hospital Center and NYU's Langone Center, were forced to evacuate. For the first time since 1888, the New York Stock Exchange was forced to close for two consecutive days due to weather. Millions of customers in New York City and on Long Island lost power — many for days and weeks — due to Sandy.

In January, the NYS 2100 Commission Report, a who's who of industry experts appointed by Governor Andrew Cuomo, released a slate of recommendations for mitigating the impacts of future Superstorms on New York State's infrastructure. Among other things, the Commission Report called for expanding deployment of distributed energy resources in New York State. For some time, well before Superstorm Sandy focused attention on resiliency, we have argued for making the grid more amenable to distributed energy resources.

The State's existing transmissions and distribution (T&D) system was not designed for and is not particularly amenable to significant increases in the penetration levels of distributed generation. It is only a matter of time before this problem comes home to roost, which is why we welcome the Commission's conclusions with one major caveat: you can only manage what you can measure and New York State is neither measuring nor managing the long-term implications of T&D capital investments.

The scope and scale of T&D capital investments are vast and commonly have an exceptionally long tail. In some instances, investments made today are likely to remain in place beyond the year 2040. It's imperative that long lived investments be screened to insure that they are in synch with announced state and local policies (e.g. New York City's PlaNYC and the State's carbon emissions-cutting 80 x 50) goals to increase the state's reliance on distributed generation and energy generated from renewable sources.

Do current protocols for assessing new T&D capital spending include metrics for assessing the extent to which the existing distribution system is making progress in accommodating higher penetration levels of distributed power systems? The answer appears to be "no."

Take Con Edison's once-in-a-generation investment in grid modernization, which took place under the auspices of the American Recovery and Reinvestment Act's Smart Grid program. Con Edison received a whopping $136,170,899 in federal funds under ARRA's Smart Grid program, which were spent almost entirely on distribution automation devices and communications assets. Those distribution automation investments were not designed to expand the electric grid's ability to accommodate distributed generation, according to reporting data available on the U.S. Department of Energy's Smart Grid internet portal.

New York City can ill afford to miss massive opportunities like these to transform the electric distribution grid.

Suppose an electric power distribution utility has a choice between capital investment A and B. Investment A and B perform the same services for the system as it is currently configured and utilized. Investment A costs less than investment B. However, despite its increased cost, investment B augments the distribution system's performance with respect to distributed generation on the network that it serves. If B has a future benefit, does it get rewarded for that attribute? On the contrary. If A maintains the distribution system functionality status quo, is there any penalty assessed, for the risks it poses insofar as the functionality is not improved?

As we make new investments in New York's distribution system we need to ensure that the direction we are heading in doesn't look like this. 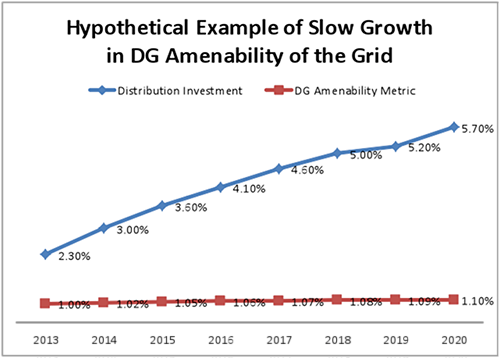 If we create the right system we can more readily insure that as we make new investments in the Distribution System the direction we are heading in looks more like this. 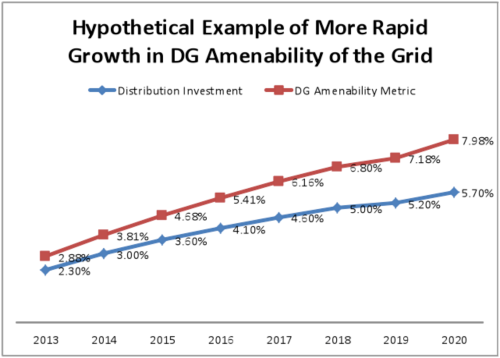 To guarantee realization of the Commission 2100 Report recommendations we must fundamentally alter the distribution system and the planning and approval process that guides the investments that determine its functionality.

As long-time advocates for environmentally superior, high efficiency distributed generation and cogeneration, we applaud the Report's conclusions. However, taking a look back at history, we are tempted to ask, "what will be different this time?" How specifically will the T&D system planning process of the utilities evolve so that this result occurs? In what way will the New York Public Service Commission's review and oversight of T&D investment evolve to ensure that investments are in synch with stated public policy goals?

Comments | From Evolution to Revolution

March 5, 2013
Con Ed's got issues with the claim by Snapshot authors Bourgeois and Pentland that the utility missed the boat for expanding a distributed power system in its once-in-a-generation investment in electric grid modernization.

February 21, 2013
Prescient in every way — the recent exposure of the extent and persistence of sovereign/industrial cyber-hostilities against our infrastructure should raise as many alarms as electrical panels being raised by Sandy.

There are immediate policy and technical obstacles to be overcome to achieve distributed power and essential services to address the next disastrous storm. We need an Architecture 2030 district in NYC where sustainable energy microgrids and thermal networks can develop, and where cooperative ventures and market endeavors can flourish along with technical and architectural innovations.

The Urban Sunspots Project seeks to seed that process with an attractive working model of free accessible energy that presents an emergency response resource of public power and communications.