Who was prepared for the annus horribilis of 2011, when GOP climate-change deniers were at work opposing progress on environmental issues? They even challenged the EPA's right to issue regulations, repudiating the authority of the Clean Air Act signed into law more than four decades ago by Richard Nixon.

In December, the League of Conservation Voters called the current House of Representatives, dominated by Tea Party activists, the "most anti-environment in the history of the Congress". When President Obama overrode the EPA plan to lower the atmospheric ozone limit to 65 parts per billion from the Clinton-era 84 ppb, who could blame environmental advocates for feeling friendless in Washington?

However, I would argue, the night is darkest just before the dawn.

President Obama has held firm on other hotly contested environmental issues. He has delayed the Keystone XL pipeline pending environmental review. He has issued new national fuel economy standards requiring 54.5 miles per gallon by 2025. He has allowed the EPA to issue important, long-awaited national standards for electric utilities, cutting their mercury and other toxic emissions.

Most important, I would argue that the climate-change deniers are steadily losing their credibility. Public opinion is catching up to environmental science in three ways.

1. The Market Favors Greener Fuels
The Wall Street Journal on November 28, 2011 crowed that green jobs were not growing much, whereas the "non-green oil-and-gas jobs" were growing fast. Of the million jobs added to the U.S. economy since 2003, one-fifth are in the oil and gas industry.

However, the excitement about job growth in "oil and gas" is mostly on the gas side. The interests of the natural-gas industry are diverging from those of Big Coal and Big Oil. Once brought to the surface, natural gas is a greener fossil fuel than oil or coal. It is far more efficient at heating than oil and is more abundant in the United States. It can help reduce our dependence on Middle Eastern oil and when burned creates fewer emissions. Most important, natural gas has some key market advantages for consumers:

The cost of switching from oil heating of a large water tank to on-demand gas heating in a high-oil-cost area pays for itself in two or three years. (In this low interest-rate financial marketplace, where else can you get anything like a 40 percent annual return?

Natural gas is much less polluting than heating oil. The abundance of U.S. natural gas could buy time to get the rest of a sustainable system in place. New York State is bent on lowering the sulfur content in No. 2 heating oil and New York City passed a law in 2011 that will phase out use of No. 6 and No. 4 heating oil.

The problem with natural gas is the way it is being extracted from shale formations far underground. The ingenious technique of hydraulic fracturing, "fracking", involves pumping water and sand and chemicals into the shale, forcing natural gas up to the surface via separate collection pipes. The chemicals are the biggest problem known to date. They are not removed by usual water treatment processes, so fracking is properly controversial near large population centers and sources of drinking water.

Hence, it is good news that venture capital specialists are currently putting more of their money into new power plants built around renewable energy rather than ones using fossil fuels. For the first time in 2010, investments in electrical generation from wind, sun, waves and biomass source exceeded investments in natural gas, oil and coal — by $187 billion to $157 billion worldwide, according to Bloomberg New Energy Finance.

2. The Market Favors Greener Products and Buildings
Business is discovering that it is profitable to do the right thing by the environment. Ecology is no longer just a niche for off-beat brands like Ben & Jerry's and the Body Shop. Large retail corporations like Wal-Mart have found that pursuing environmental goals is consistent with cost-cutting and higher profits. Some like Whole Foods have been growing fast by targeting environmentally conscious consumers. Duke Energy is one of a number of electric utilities that actively support a cap-and-trade system and is committed to investing heavily in wind power.

A good place to identify market-driven environmental progress is in the U.S. building industry. Big city buildings are major users of energy, which, by the way, place costly stresses on existing utility systems. In the process they are major emitters of carbon dioxide whether on-site or from electric power plants.. They use close to three-fourths of U.S. electricity and 40 percent of energy, according to the US Energy Information Agency Annual Energy Outlook. 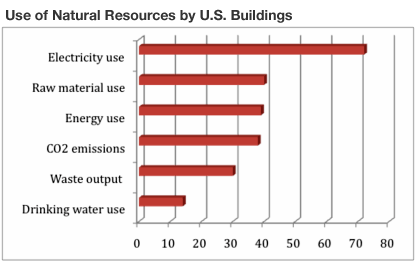 The market test is whether lowering energy costs will be reflected in the value of real estate — energy is 30 percent of a building's operating cost. This connection has been documented by Berkeley faculty:

Returns to residential buildings that obtain the "Green Mark" in Singapore are "substantial", according to 2011 research.

A study of U.S. buildings shows that economic premiums for rentals and sales prices for green buildings are substantial and have not been reduced by the recent volatility in the housing market or by the increased availability of green buildings. Premiums persist for both thermal efficiency and other sustainability features. The average premium within rated buildings was a 3.5 percent higher rent ($0.95/sf) for every dollar saving in building energy costs, and a 4.9 percent ($13/sf) higher building valuation. These studies reinforce my own perception of what is happening in the green marketplace in New York City and area.

The "low-hanging fruit" of "negative-cost" energy-efficiency investments that McKinsey & Co. diagrammed in 2007, 2008, and 2009 is now bending to eye-level. One missing piece has been financial support for homeowners who see the logic of investing in insulation or on-demand heating but just don't have the cash on hand. New York State in June passed an On-Bill financing law enabling homeowners to make energy-efficiency investments that are paid for over time on their electricity bills.

I have reviewed lists of hundreds of names of entrepreneurs in green incubators or providing green services in New York City or on Long Island. I have assigned these names to industries based on the services they provide. The largest single group, it turns out, is made up of individuals and firms working on ways to introduce or disseminate green practices in building construction or management.

A green architect in Woodstock, NY switched to the latest version of the REScheck software of the U.S. Department of Energy in order to comply with the residential Model Energy Code. The architect, Curry Rinzler, found that the latest software gives less credit for heating efficiency than the old one. When he called the Department about this, they said that marketplace incentives for more efficient heating were now abundant. They therefore shifted the attention of the software to other variables. Mr. Rinzler got the credits he sought by complying with the code for the geo-placement of the building.

3. Public Opinion Is Catching Up to Climate-Change Science
Public opinion is catching up to science. According to a Pike Research survey in 2011 of a sample of more than 1,000 people, solar and wind energy both have the approval of three-fourths or more of those surveyed. Electric vehicles are not far behind in support. Where public opinion lags is on specific legislation to put a price on carbon (i.e., to make the social cost of carbon emissions part of business costs). The same Pike Research survey that showed broad approval of solar and wind energy projects showed a lack of faith in cap & trade, with approvals below 20 percent.

A cap-and-trade system was the centerpiece of the Waxman-Markey bill that passed the House in 2009. Cap and trade was devised as a way to induce the marketplace to establish a price per ton of carbon through a system of emission permits and a declining annual cap on permitted emissions. However, lobbying on the cap-and-trade legislation was fierce, with 1,098 different entities such as corporations and unions weighing in during the 111th Congress, according to Open Secrets. It's no secret that most of the lobbying was on behalf of Big Fuel.

After the 2010 elections, the House majority shifted to a GOP that was repopulated with many new Tea Party members opposed to virtually any environmental legislation. Here is what happened:

The planet did not have a seat at the GOP table. Gradually, the reason became clear — the planet was on the menu.

The presidential candidate who seemed earlier to be respectful of the warnings of environmentalists, Jon Huntsman, was reported in early December as joining the other candidates in questioning the threat of climate change — "the scientific community," he said, "owes us more".

A funny thing happened along the way to this victory for the CO2 climate-change deniers. Moderate and liberal Republicans, according to the Pew Research Center, have been forced off the fence, creating a mini-schism in the party. In 2009, just 41 percent of moderate Republicans believed there is solid evidence for global warming; in 2011, the share rose to 63 percent.

Retired Republicans who were environmental leaders are prodding GOP members of Congress to pay more attention to the evidence.

4. Looking Ahead to the 113th Congress
Clearly, there are big reasons for being optimistic about environmental progress — the Tea Party has overplayed its hand in the 112th Congress, the marketplace is catching up to science, and business executives are looking for energy-efficient buildings and are willing to pay more for them and invest their own money in them. And don't forget the American public's appreciation of green issues is growing steadily and is driving change on the ground.

Does a little green optimism diminish the need to campaign for stricter environmental laws? No. The nation and the world need the price of carbon fuels to rise closer to their true social cost, through a tax or a cap. This is essential to speed up the functioning of the marketplace, as economist Arthur C. Pigou argued a century ago. While in the 111th Congress the broad cap-and-trade bill never got to the Senate floor, a bill focused only on large entities might fare better. Senator Maria Cantwell's bill (Cantwell-Collins) was a simple and brilliant concept along these lines, targeting large utilities and "upstream" pollution. However, it appeared late in the game and was described as insufficiently "detailed". If some large businesses such as electric utilities get behind such a bill, as they should, it might get some traction in the 113th Congress.

Could 113 be a lucky number? Stay tuned.