Finding the Proof of Energy Retrofits

New York City is poised to exert global leadership on energy efficiency in existing buildings. Much has been made of the "Greener Greater Buildings" laws that spell out an array of energy requirements pursuant to the goals of PlaNYC 2030. Over the next decade we will see what results are achieved in implementing legal requirements for energy code compliance, benchmarking, audits, retro-commissioning, and lighting improvements. Key players, led by NYC government itself, have committed to "early implementation" by 2017. The current administration is budgeting 10% of it municipal energy expense for annual funding of energy efficiency improvement projects in municipal buildings. This amounts to $100 million per year.

By new construction standards, where costs easily run to $300 per square foot, this is not a huge sum. But by standards of energy conservation programs, where funding typically is more like $10 per square foot,[1] this is indeed a large budget and a substantial opportunity with global implications. The program is under the management of the NYC Department of Citywide Administrative Services, utilizing a well thought out approach that follows the conventional practice of the energy services industry: benchmark, audit, implement, train, operate and maintain, meter and monitor.[2]

Given its high stakes and public profile, due consideration must be given to the reliability of outcomes. This leads to the question of what experience is available that could provide insight into likely program performance.

The best place to look, perhaps surprisingly to some, is Texas. Since 1988 the Texas Energy Office has operated LoanSTAR, an energy efficiency revolving loan fund for municipal and state government facilities. From $98.6 million in core funding (based on petroleum violation escrow funds), 191 loans totaling over $240 million have been made through 2007[3] — the fund's capital has been re-paid twice-over and re-cycled into new loans. The loans target public buildings — school districts, government buildings, higher education, and hospitals — making it a portfolio mix not unlike what can be anticipated under NYC's program.

With Texas LoanSTAR's mix of facilities, range of retrofit technologies deployed, level of funding and sustained multi-year effort, one could hardly have designed a better pilot program for New York City's effort. Most importantly, the program included a rigorous evaluation effort conducted by the Energy Systems Lab at Texas A&M University (ESL-TAMU). The ESL-TAMU applied engineering and architecture faculty and graduate student resources at a significant level for more than ten years. At any given time four or five senior researchers, Principal Investigators assigned to state-contracted program tasks, would be overseeing the work of ten to fifteen faculty researchers supported by thirty to forty graduate students and technical staff.

This program produced the nation's best-documented analysis of a body of energy efficiency retrofits to date. A comprehensive catalog of the ESL's papers and reports is available for download. The work was an important precursor to the emergence of energy efficiency measurement and verification (M&V). ESL-TAMU staff became important contributors to the field's key documents, the International Performance Measurement and Verification Protocol (IPMVP) and ASHRAE Guideline 14.

Findings on Audits and Actual Performance

So what was learned?

Evaluation of this multi-year retrofit experience showed that energy savings from retrofits across a portfolio could be realized, documented, and maintained. The engineering predictions from energy audits could be trusted. Findings from studies conducted in 1995 and 1996,[4] based on over 150 building retrofits, showed the following:

But there is a catch. While the results for the overall set were good, the outcome for any particular building fell within a wide range from predicted. Savings outcomes were seen to fall almost equally on either side of a line representing a 1:1 correspondence of predicted to actual savings, often with substantial variation. 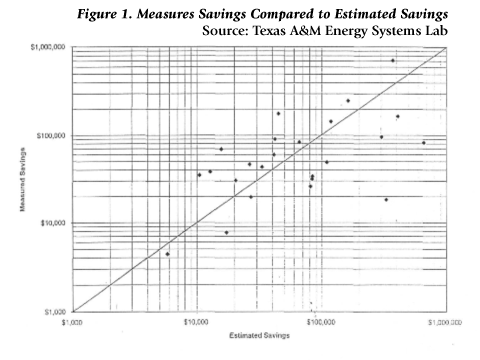 Was this uncertainty in outcomes a function of audit error (prediction) or of retrofit performance?

The answer turns out to be some of both. Audits, done under the LoanSTAR program by independent engineering consultants, were subject to TAMU standards but nevertheless problems in savings estimates were found in some 20 – 30% of cases reviewed. Such savings estimates were made subject to post-hoc adjustment, which is to say that new predictions were developed based on engineering analysis and used for comparison to actual results. But it was also found that systems were often not operating as intended and that performance could be improved by adjustment.

In the following plot of a sample of buildings (again with the black line showing a 1:1 correspondence of audit-projected savings to actual performance), vertical lines show sites where savings estimates were adjusted without change in performance and horizontal lines show sites where savings estimates were unchanged but performance was improved by system adjustment. Figure 2 adds to the picture from Figure 1 by showing adjustments over time. We can see in this chart the significant opportunity to improve post-retrofit system performance. Interestingly, performance improvement can be achieved almost as frequently in cases that were exceeding predicted performance as in those cases that were under-performing in relation to prediction. 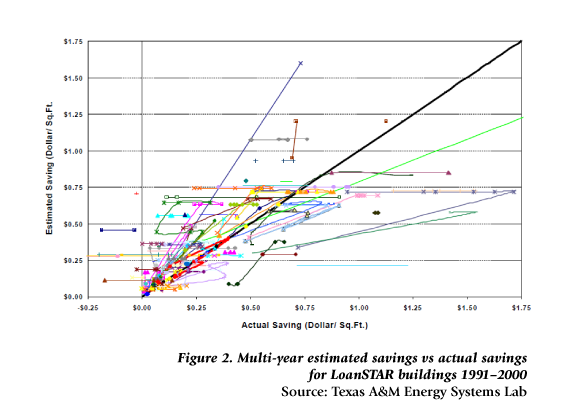 One important lesson here was that the predictability of savings for any specific site could be improved by follow-up based on Measurement and Verification (M&V), acting as feedback on the implementation process and on-going operations. A second lesson learned is that beyond just predictability in meeting audit projections, absolute project performance could be improved. The tendency of project performance to degrade over time (as controls and settings slip out of adjustment, for example) could be reversed by keeping operators alert to performance. With M&V-based monitoring applied in this way, the overall portfolio performed over time by 20% better than (the total of) the audit projections.[6]

The value of M&V applied as process feedback led to the concept of Continuous Commissioning, eventually trademarked by ESL-TAMU. Commissioning savings could be attributed to the adjustment work, independently of the retrofit project and were understood to constitute as much as 25% of portfolio savings — and at much lower cost.

This kind of monitoring process relies on intensive data acquisition and analysis. On an individual building basis, it may be accomplished using the computer-based Building Automation System supplemented as necessary by portable data-loggers and other instrumentation. But for a large, programmatic building set, a coordinated system is required that will collect data and recognize patterns. We have become very familiar with extensive, complex networks integrating multi-site data acquisition, storage, and automated analysis. ESL's LoanSTAR project pioneered such an application for energy monitoring. Pattern recognition of actual versus performance modeled is also an on-going field that is critical to keeping track of large numbers of sites. 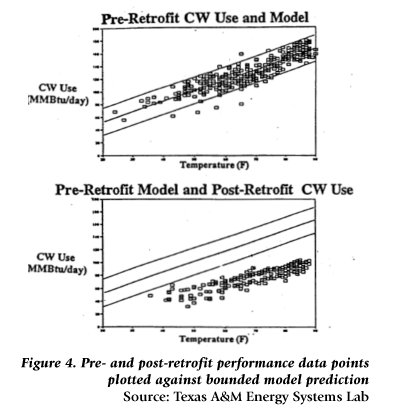 So what are the implications for NYC?

A process that will achieve its targeted energy and carbon reduction entails more than "invest in retrofits" because that would leave the investment open to significant risk of under-performance. New York City's plan includes metering and monitoring, but for this effort to really pay off, substantial infrastructure is required, in terms of both hardware and human knowledge resources. Performance depends on feedback through such a system. It will not pay to skimp on this phase.

The City's budget process is said to be skewed towards capital improvements. But as we have seen, operations, which are paid for in the expense budget, really matter. Completing both retrofits and the data acquisition infrastructure will not matter if we are unable to effectively integrate them into operations. Here is a prime case where the balance of allocation between the capital and expense budgets, can significantly affect performance and outcomes. The CIUS Building Performance Lab has developed a simple spreadsheet that allows alternative allocations to be explored quantitatively.[8]

[5] Savings are discussed in energy units, not dollars in order to eliminate the variability of energy prices.