On an ordinary day in 2007, I had a professional epiphany when I was drawn to a presentation at the American Museum of Natural History entitled "A Picture is Worth a Thousand Graphs: The Psychology of Environmental Decision Making." Delivered by Dr. Sabine Marx of the Center for Research on Environmental Decisions at Columbia University, it detailed the ways in which the human brain processes complex bits of information leading to decisions that either ensure an individual's survival or spells their demise. How information is delivered, argued Marx, makes a world of difference.

We can have a high awareness of something but not be motivated to do anything about it. Climate change is a perfect example. This is in part because the mind has two different processing systems: the experiential, the source of emotions and instincts, and the analytic, which controls how we process factual or scientific data. The former is the more powerful motivator provoking us to take action but it can be short-lived so needs to be supported by facts from the analytic side. To effectively communicate an issue, both systems need to be engaged.

Here is where the epiphany comes in. Having spent more than twenty years in the art world as an advisor and curator, I am thoroughly aware that art is one of the most powerful forms of communication, a fact Marx's research confirmed. Art, however, flies under the radar. Its vivid imagery, metaphors and personal narratives appeal to the experiential system evoking deep emotions. Art needs to be combined with facts to maximize its power to effect sustained behavioral change.

What drew me to Marx's talk, and ultimately to collaborate with her, is what drives my work today: the opportunity to genuinely affect the decisions individuals make that impact the environment.

Today's art offers a trans-disciplinary model able to deliver on both the emotional and the factual. Its creations are often collaborations of minds from interactive media and gaming, physical computing and science as well as traditional art. It can be immersive, participatory and a potent force in the drive toward sustainability. This is no mere hypothesis.

People are more apt to care about a problem if they feel they have an active role in solving it — even more so when they feel part of a group. Exactly for these reasons, participatory art that incorporates interactive and social media is potent. One example, SEED, by the artists collective of the same name, is a web-based interactive public art project that does just this. Created for multiple users who engage with its large-scale surreal imagery via a cell phone, players "plant" and design virtual trees with their keypads. The amount of time each participant is engaged in play is matched by sponsorship dollars that go to planting real trees in the places from which the caller come. In 2007, 4,067 virtual trees became 407 actual trees.

Every green building — or one in the process of becoming greener — represents an opportunity to increase its occupants' understanding of the technology and their emotional embrace of the philosophy of resource-efficient building. These buildings should engage and enable users to become part of the process. When available at all, typical approaches to educating occupants can be dry and didactic. While brochures, websites and even dashboards enumerating a building's energy saving statistics are informative if they are read, they do not always accomplish true engagement and sustained behavior change on the part of occupants.

While cutting-edge green design is increasingly able to circumvent the "human factor" in energy waste through automated systems, these buildings do not always perform as planned. As important, most buildings' energy systems are just not this sophisticated. They still rely on human behavior, which is notoriously unreliable. If we were totally rational beings we would be doing all the "right" things all the time. So tapping into a more effective way to influence occupant behavior is key to successful green building.

Energy is largely invisible, apparent only in the devices that support and enhance our lives. Make this power visible, particularly the balance between what comes in and what goes out, and we have something we can grasp. This is the function of technology-enabled feedback devices such as dashboards and smart meters that have proved effective in reducing domestic consumption. But their efficacy is difficult to sustain since people often loose interest after the initial novelty of knowing where the power goes wears off.

Research on effective designs for these tools is on-going, but the answer may lie in enlarging the experiential potential of these feedback systems. In other words, add art into the mix: art that employs sensoring technologies and is able to deliver real-time data in forms that engage our aesthetics, curiosity and sense of wonder. Such is Balance by Jeff Feddersen, a large-scale kinetic sculpture, elements of which reveal energy coming into the building, others that show energy being used. When Balance is in balance, the building is as well. 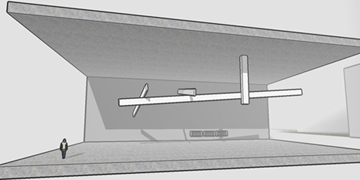 Matsukaze, by architect and artist Yumi Kori is a series are xenon-filled glass tubes stimulated by an electrical current, creating in essence, lightning. Each glass element reflects the energy use on a building's floor: the more intense the glow and the more frenetic the lightning, the less energy is being consumed there. 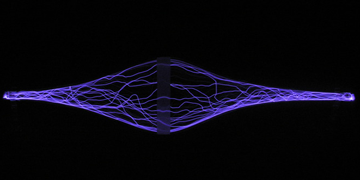 While Matsukaze, and Drop by Rebecca Bray, which reflects water use, illustrate the power of making the invisible visible, they also engage another powerful motivator, competition. Entertaining and edifying interactive games can take advantage of this tendency by having offices, floors, entire buildings or cities face off against each other in the drive to reduce energy consumption. 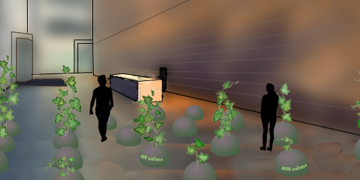 Making the results and activities public increases the potency of their potential impact and here's why. Making the invisible visible in an artful way raises occupants' sense of responsibility and accountability and can make a forceful public relations statement that a building, tenant or metropolis is actually walking the talk.

With a stronger focus on energy and resource conservation and carbon emissions, benchmarking, building labeling such as Energy Star, ASHRAE BEQ and LEED 3.0 emphasize actual and ongoing sustainable results beyond the completion of construction.

Building owners and occupants should realize that now, more than ever before, is the time to truly engage in their sustainability efforts as a matter of course. It's also an opportunity to use creative strategies to communicate compellingly to the public about how buildings function. And here's the secret hiding in plain sight, art, with all its emotive and experiential impact, is, in fact, a rational strategy.

Victoria Anstead, LEED-AP, is founder and principal of Tactical Aesthetics a consultancy that produces creative projects focusing on the human factor in the drive toward sustainability.