According to an old Russian proverb, "Free cheese is found only in mousetraps."

When it comes to money gained through energy efficiency, as Sallan's regular readers know, this isn't true.

Investing in energy efficiency projects can create new money. A 2008 study by the respected McKinsey Global Institute concluded that at least one half of projected worldwide energy demand growth over the next twelve years could be met through increased energy efficiency in all sectors of the economy — and this can be accomplished by employing existing technologies that generate significant rates of return on investments. By more than paying for themselves, these energy efficiency technologies will generate capital that can be spent elsewhere.

After all, Russia is the world's largest country by territory and the #1 global exporter of energy (#1 in natural gas, #2 in oil). Worldwide, it is also the #3 emitter of greenhouse gas pollutants from fossil fuels, and will stay among the top emitters at least through 2030. Russia is also one of the most energy wasteful countries in the world; its energy intensity is roughly twice the global and US average.

I was fortunate to have had the opportunity over the past three years to work in Moscow on energy efficiency and climate change issues, and to learn firsthand whether in fact energy efficiency is taking hold in Russia. (In early 2006, I moved with my family to Moscow, where my wife was born and had an exciting work opportunity. We returned to New York this past summer.)

The good news is that over the past several years, Russian leaders have strongly supported expanding energy efficiency laws and programs in Russia. Two years ago, for instance, Prime Minister Vladmir Putin declared that making Russia more competitive in the world economy required "action to make our energy consumption radically more efficient." And last year, President Dimitry Medvedev took this call for action further by signing a decree directing top officials to draft new energy efficiency laws, and setting a goal of slashing the country's energy wastefulness by 40% by 2020.

The bad news, as President Medvedev acknowledged early this fall, is that only very modest progress has been made in advancing concrete, on-the-ground energy efficiency projects, including public education campaigns.

But given the Kremlin's strong backing of energy efficiency, it is likely in the coming months and years that Russia will begin to make slow progress in this area. And the energy efficiency experiences there -both good and bad — can help advocates better focus their strategies for building sustainable cities and communities.

Here are four lessons that I took away from my time in Moscow.

First: it is important to have a single government entity in charge of advancing energy efficiency. In the US, we have seen how critical it is to have one agency overseeing specific local, state or federal environmental programs. Unfortunately, in Russia, energy efficiency responsibilities are scattered throughout the federal government and this is one major reason things are still stuck in first gear there. In Russia, the best approach is to have one strong federal agency responsible for implementing national priorities, including enforcing concrete targets and timelines for achieving greater energy efficiency in the residential, commercial, public and industrial sectors.

Second: there needs to be a major policy and compliance focus on buildings when developing a comprehensive energy efficiency strategy. In the US, commercial, residential and public buildings consume — including through heating, hot water and lighting — roughly 40% of total energy usage. In Russia, experts believe that this number is as much as 50%. Surprisingly, Russia already has some of the most progressive mandatory efficiency standards in the world for how new buildings are designed, constructed and operated. But there are big questions on how effectively these laws are enforced.

Third: in the same vein, heating systems are a chronic source of energy losses. 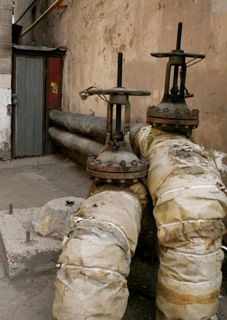 Russia is a little unique in that nearly 70% of the heat generated for buildings comes from large, centralized so-called "district heating" systems. Under this setup, centralized boilers pump heat to nearby buildings through underground and above-ground pipes. But the current system is made of up largely inefficient boilers and leaking transmission pipes (as much as 25% of the heat alone escapes before it reaches apartments). And, like some residential and commercial tenants in the US, there is little incentive for residents to reduce waste because they are not charged for actual heat usage. Russian consumers have not been provided with know-how and resources to take simple steps, such as fixing or replacing windows and adding insulation that can dramatically reduce heat loss.

Fourth, and finally: Setting efficiency standards for consumer appliances can make a big dent in a country's energy usage. Household appliances such as refrigerators, TVs, computers and lamps consume large amounts of electricity. For this reason, many countries have imposed mandatory limits on how much energy certain household electrical devices can utilize. In the US, such minimum efficiency rules have slashed refrigerator energy usage alone by 75% over the last three decades, while the (true) cost of new refrigerators has been cut in half.

In sum, in a country with a bad historic track record on environmental issues, the Kremlin now sees energy efficiency as a top national priority. The primary reason for this shift is not concern over the fate of polar bears from global warming or localized air pollution problems. Rather, it stems from the recognition that energy efficiency will help to modernize the Russian economy, free up financial resources, and provide more energy security for that nation. But if these rationales can motivate Russia to radically reduce its energy waste, this will help the world community address climate change through lower greenhouse gas emissions and provide significant public health benefits to its citizens from cleaner air. And, in the end, energy efficiency will have allowed Russia to capitalize on a mousetrap-free way to better its economy and environment.

Mark Izeman is Director of the New York Urban Program at the Natural Resources Defense Council. While working in Russia, Mark created, and continues to moderate, the Russian Energy Efficiency and Climate Change Listserve. He will be discussing Russia's environmental situation in his one-hour presentation entitled "A Naive American's Guide to Understanding Russia" in NRDC's New York office on Wednesday, December 2nd at 6:30 pm. If you are interested in joining the Listserve, or attending the presentation, you can reach him at mizeman@nrdc.org.