Green jobs sound like a business opportunity. President Obama is committed to creating five million new green jobs via subsidizing energy alternatives and conservation, and discouraging reliance on fossil fuels. The same commitment is occurring at the state and local level. On January 26 New York's Governor David Paterson told a conference on green jobs that he intended to convert 45 percent of the state's energy use to alternative sources by 2015.

Do New York City's green entrepreneurs have "shovel-ready" business plans? The Sallan Foundation has asked me to look at the green movement through the prism of a new (less than a year old) eco-incubator in Brooklyn called Green Spaces. I come to the assignment having worked on the 1999 study of the New York City software industry undertaken by the then City Comptroller, Alan Hevesi. From that study, I became enamored of Henry Etzkowitz's concept of the "Triple Helix" — bringing together government, business and university resources to create new companies.

Later, I spent more than half a year working in the incubator of the NY Software Industry Association at 55 Broad Street. Green Spaces is located on less expensive real estate, yet easy to get to from Manhattan via the 2, 3, 4 or 5 train to Nevins Street, right across from the incubator building. See bottom of Google map below. I note approvingly the proximity of universities — a campus of Long Island University is a block away and northwest of that is tech-mecca Brooklyn Polytechnic, just recently absorbed into NYU.

Green Spaces occupies the fifth floor of 33 Flatbush Avenue (name on the building is Metropolitan Exchange). The intercom directory shows all the tenants. I am buzzed in, take the elevator up and meet the founder of the space and resident manager, Jennie Nevin. I never got to ask her whether Nevins St. was named after one of her ancestors.

The light streams in to the fifth floor from the front and the back of the long industrial-standard floor. The 16 incubatee companies, composed of 1-3 people each, occupy physical as well as business niches. The center of the floor houses an open kitchen that has samples on hand from Kumkuat Cupcakes and coffee courtesy of Crop to Cup.

I am most interested in the green companies that have a strong technical component and are scalable, i.e., can expand quickly if they get the model right. On this basis I pick half of the 16 tenants to interview:

I would also have liked to interview SunOne Solutions, which helps make a carbon trading market, but the principals were in Washington.

My general observation about Green Spaces is that it's a nice place to work. Everyone here, it seems, has a laptop that they treat with the highest respect and affection. Just as someone walking a dog is easy to approach if you admire their pet, so also a quick way to break the ice here is to admire the incubatee's laptop.

Didn't see any large computers. If green entrepreneurs are cowboys and their laptops are their horses, they seem to prefer Shetlands to Clydesdales.

But this is no rodeo. It's more like a study room, with all the incubatees hard at work on their theses. Their collective thesis is that business can make the world a better place. These entrepreneurs are studiously engaged in envisioning more environmentally friendly systems and then making them happen. They are engaged in God's work.

Sea to Table
The first incubatee I interview is Sean Dimin of Sea to Table. His business card has a slogan on both sides. One side says: "Direct from fishermen, delivered overnight." The other side says: "Connecting fishermen with chefs." These slogans leave out what is most important for a green company, the fact that Sean is deeply concerned about overfishing and handles orders only for wild fish, sustainably harvested and delivered direct. He seeks out fish certified to the standards of the Marine Stewardship Council. 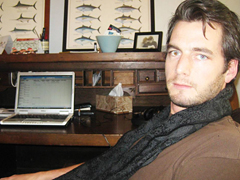 Sean provides fish advice to large restaurants in New York City and elsewhere in the United States, and he has associates in four other cities providing the same service. He has a list of large restaurants and another list of fishermen (Sean insists that the word is not sexist; it is "gender neutral") and he puts the two groups in touch with each other.

Sean has two large posters over his desk. One is of "billed fish" like marlin (is that a nephew of mine up there?). The other poster shows various kinds of tuna. His main fish he sells are Tobago Wild, Alaska Wild and Dixie Wild (from the Gulf and Southeast Atlantic). These fishermen fish with hand lines.

He is able to bypass the markets by relying on email and phone and keeps track of everything on his laptop. Deliveries are made via FedEx with gel ice (FedEx won't take dry-ice packaging). This is a green business because of great benefits to the environment: (1) Only one trip, from fisherman to restaurant, meaning less of a carbon footprint (and less cost); (2) Shipping is consolidated with other shipping, eliminating fish trucks; (3) Assurance by Sea to Table that no endangered fish are being purchased, with MSC-certified fish; (4) No fish market is required; and (5) Much less waste and fresher fish.

Incubators are for babies that will grow bigger. What is the growth trajectory for Sea to Table? It needs to expand supply by working with more fisheries. It needs to expand demand by adding more large restaurants in more cities. The sustainable model takes longer to catch fish and so they are more expensive. I would bet on the idea that people are going to care increasingly about where their food comes from.

Crop to Cup
The second incubatee is Crop to Cup, which is a small ethical trading shop that imports coffee and sells both unroasted "green" coffee to roasters around the country and roasted coffee on its website. It also sells the coffee wholesale to restaurants, grocery markets and the food service industry.

Ethical trading is quite simple means paying small farmers in a developing country more than market price for their products. The consumer gets quality coffee that competes on price with similar quality coffee, with the additional pleasure of knowing that the farmer is being well treated. I have tasted the Crop to Cup coffee at Green Spaces and at home and it's good. 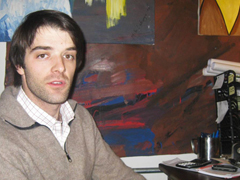 There are quite a few such ethical trading efforts under way, and coffee is a product that is very likely to be ethically traded, especially coffee sold in coffee shops. Once it is known that a coffee shop, say Starbucks, is selling only ethically traded coffee, who would want to be seen drinking coffee in a coffee shop that denied farmers the extra money for their labor under the hot African sun? Crop to Cup's unique selling proposition is that its coffee that is branded with the photo of the farmer from whom the coffee is purchased. I'm looking at a baseball-card type handout showing us Topista and Joseph Namisi, two Uganda farmers who have a farm in Gabagi Village, Bugisu, Uganda. The card tells us that they have 2,000 coffee trees and six children. Topista also teaches in the local elementary school. The link to the local farmer is a very nice touch that is likely to be imitated in future if it isn't already.

Crop to Cup says that it pays the farmers 20 percent more than market price. In addition, it gives 5 percent of revenues and 10 percent of profits to community development organizations in the areas where the farms are located. Through Crop to Cup's nonrpofit arm, DevelopNet Iganga, which supports Uganda development, the 5 percent of revenues that are reinvested in farmers are treated as donations on behalf of customers. So a wholesale customer sending $5,000 with Crop to Cup in one year can take a year-end deduction from taxable income of $250.

In addition it gives 5 percent of revenues and 10 percent of profits to community development organizations in the area where the farm is located. In addition, Crop to Cup accepts tax-deductible donations to a nonprofit organization (Iganga) that supports Uganda development.

C2C's credibility depends on the individuals who run it. The two young men in the incubator have the eco-credentials as well as the appearance of a well-organized operation. Taylor Mork used to work with Cal Safety Compliance Corporation (CSCC), a worldwide certification body, and therefore understands the importance of traceability and quality and the need for management systems to ensure these elements in the supply chain. C2C is not certified to any standard yet, but neither are most small startups. 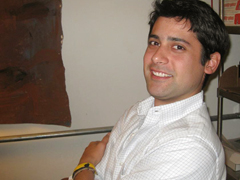 Taylor's partner at the incubator is Jose Fernando Aguilar, who grew up in a coffee-growing area. Both of them have cards giving "Farmer Representative" as their titles. Their firm has two other partners in Chicago — Jake Elster and Neil Balkcom. This project is eminently green. Worker conditions are part of the green movement. Taylor's background in the certification business should be very valuable as the organization scales up. However, maintaining contact with the farmers is labor intensive.

A shortcut to expansion would be for Crop to Cup to be acquired by a larger business that wants to sell ethically traded coffee. I like the link to the farmer but predict that as the company gets bigger some shortcuts will need to be made. For example, the supply chain and information on farmers could be connected to a number or name on each bag of coffee. The consumer could then find out about the farmer on the Crop to Cup website or on a poster at each retail outlet.

My other six interviews will be posted on Huffington Post under the Green Edge brand. Green Spaces is a good idea and is well executed.

One last thing — I have been asked by Jennie Nevin to help publicize their green business competition, for which the deadline is March 22. They are giving away three baskets of startup help for the right companies worth $25,000, including up to one year of free desk space at Green Spaces. For more information just click on Green Spaces.